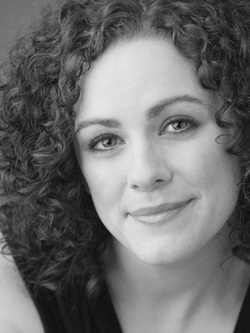 Hilary Park has been praised for her musical sophistication, vocal agility, and solid musicality. No stranger to concert repertoire, Ms. Park was a featured soloist on Voices of Ascension’s 2009 Grammy-nominated recording, Song of the Stars, by Naxos.  She has appeared with the Washington Summer Opera as La Fée in Massenet’s Cendrillon, where she received critical acclaim as she, “managed her fairy godmother role with sparkling Queen-of-the-Night coloratura”… Cecelia Porter, Washington Post, and as Miss Silver in The Impressario, where the singing and acting were “splendid”….Joseph McLellan, Washington Post. Hilary also sang the role of Nella in Gianni Schicchi with the Washington Summer Opera.  Some other roles include Serpina in La serva padrona, Blonde in Die Entführung aus dem Serail, Susanna and Barbarina in Le nozze di Figaro, Queen of the Night in Die Zauberflöte, Adina in L’Elisir d’amore, and Elsie in The Yeoman of the Guard.

In concert, Hilary has been featured as a soloist at the Church of the Ascension, Trinity Wall Street, Washington National Cathedral, The National Shrine of the Immaculate Conception, and The Episcopal Church of the Redeemer (Bethesda, MD).  She has done solo concert work with the Annapolis Opera, The Three Rivers Choral Society (Pittsburgh, PA), the Pittsburgh Opera Center, Conflitti di Voci (New York City), Palm Beach Masterworks Chorale, Cathedra, and the Inscape Chamber Orchestra.  Hilary has also enjoyed success on the new music scene, and was a featured soloist on experimentalist composer Bora Yoon’s 2009 record release party.

Hilary is a graduate of West Virginia University and the Peabody Institute of the Johns Hopkins University.  She also studied in Salzburg, Austria, where she performed several roles with the Austrian American Mozart Academy.  At Peabody, Ms. Park was awarded the Anita Erdman Award for Opera and was a two-time recipient of a Peabody Career Grant.  She was also a finalist for Opera Music Theater International, and was the winner of the Francis Yeend Vocal Competition. Currently, Ms. Park is D.M.A candidate in voice pedagogy at Shenandoah Conservatory, where she also teaches.